Clickbait Remover for YouTube is a browser extension for Google Chrome that removes clickbait video thumbnails on the video hosting and streaming site.

YouTube publishers have several options when it comes to the selection of a video thumbnail for uploaded videos. Publishers may use a frame of the uploaded video as the thumbnail or another image; the latter does not need to be from the video and some publishers use it effectively by selecting thumbnails that don’t necessarily reflect the content of the video.

Common clickbait thumbnails include exaggerations, stylized thumbnails, or thumbnails of barely closed women. Basically, any thumbnail that is designed primarily to attract the attention of the YouTube visitor instead of depicting the actual video content is considered clickbait.

Note: The extension requests access to the browsing history currently. The developer changed that so that it does not need to request the — rather scary — permission anymore. A new version has been uploaded to the Chrome Web Store and will be made available in the coming days.  Interested users may check the source on GitHub for verification.

Clickbait Remover for YouTube addresses the issue directly. It is designed to replace video thumbnails on YouTube with a frame from the video. The extension uses an official YouTube feature for that; the service creates video thumbnails automatically when videos are uploaded and preserves those even if the publisher picks a custom video thumbnail for the uploaded video. 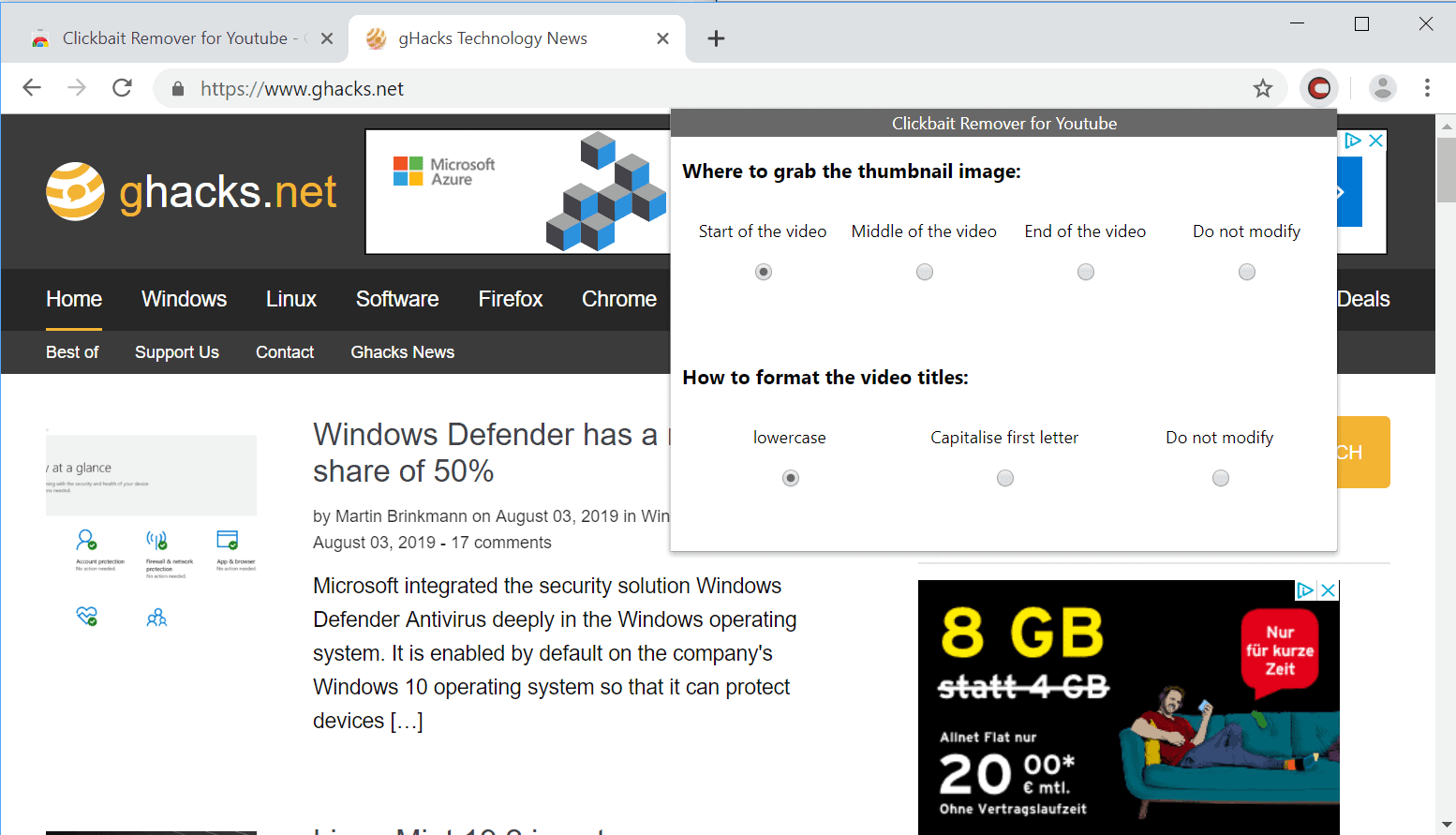 The extension may also adjust the titles of YouTube videos by forcing them to be all lowercase or capitalizing the first letter only; this takes care of publishers that use all-caps in titles to draw even more attention to their videos.

The extension works on all pages on YouTube including searches, the homepage, trending pages, channels, or the subscriptions page.  The extension should work in other Chromium-based browsers such as Vivaldi, Opera, Brave, or Microsoft Edge but I did not test that.

Clickbait Remover for YouTube is a useful extension that deals with certain forms of clickbait on YouTube. It replaces custom video thumbnail images with stills from the video itself; this deals with clickbait attempts and gives users a better idea of a video’s quality and content.

Now You: what do you do when you encounter clickbait on YouTube or elsewhere?

Ghacks needs you. You can find out how to support us here (https://www.ghacks.net/support/) or support the site directly by becoming a Patreon (https://www.patreon.com/ghacks)). Thank you for being a Ghacks reader. The post Get rid of all the clickbait YouTube video thumbnails appeared first on gHacks Technology News.