Microsoft released the November 2019 Update for the company’s Windows 10 operating system on November 12, 2019. The update is available to “seekers”, administrators who run manual checks for updates on devices running Windows 10 or who use the Update Assistant or other tools to download and install the new feature update.

Windows 10 version 1909, the November 2019 Update, is special as it is the first feature update that has not been released like all other feature updates that came before it.

The core difference is that the update is turned on using what Microsoft calls an enablement package; this package is merely a switch that activates the new version as all of its files were already planted on systems that run the May 2019 Update for Windows 10. 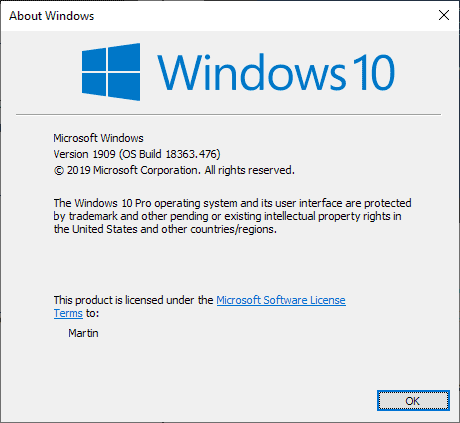 One of the questions presented during the presentation and the answer that Microsoft gave was the following one:

A: Delivering the 19H2 feature update via cumulative update and an enablement package is  a pilot program. There isn’t a formal plan in place to deliver future releases in the same way. We are closely monitoring feedback and hoping to learn from this type of release to help influence our future plans

There you have it; Microsoft confirms that it may use the new process in the future but that it does not have plans to do so in 2020.

I still think that two feature updates per year are too many. First, because it adds a lot of stress to administrators who have to deal with these updates — which take longer than regular cumulative updates and are more error-prone — and second, because these don’t add too many new features to the operating  system either that would warrant a major new release.

Now You: What is your take on this? Is two major feature updates one to many? (via Windows Latest)

Thank you for being a Ghacks reader. The post Microsoft has no plans to make future Windows 10 updates like Windows 10 1909 appeared first on gHacks Technology News.