You may remember my previous article about how to disable Twitter’s new design. I had been using those tricks to avoid the new interface until yesterday when Twitter disabled the options for my account.

In case you are in the same boat, there’s good news. There is an alternative way to get the legacy interface back. Here’s how to do it. 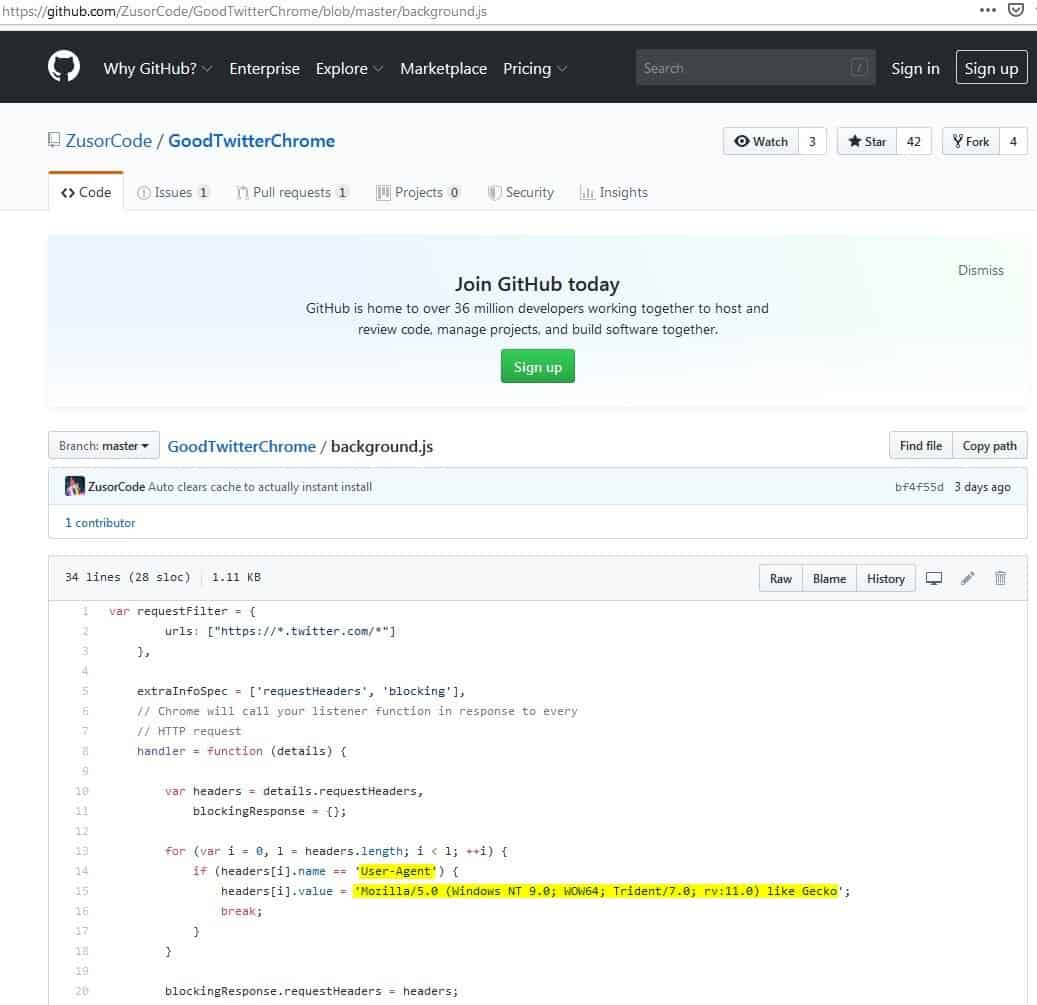 GoodTwitter is an extension for Firefox and Chrome which restores Twitter’s old interface. It is a new add-on but that is understandable considering that Twitter started to roll out the new design just recently. For those worried about the permissions, it is an open-source project, the source code is available at GitHub.

Take a look at the code, and you will see that the method it uses (which I have highlighted) to restore the old Twitter interface. It spoofs the user agent that is sent to Twitter which sees the browser as Internet Explorer. This essentially tricks Twitter to load the website in a design that is compatible with IE which is the old design. Download GoodTwitter from the Firefox add-ons repository, or the Chrome Web Store. That’s it, you don’t have to do anything else. There are no settings to tinker with. I tested the extension in Microsoft Edge 77.0.223.0 and Mozilla Firefox 68.0.1, and it works fine.

Note that some functionality may be limited on the site as Twitter “thinks” the browser that is used is Internet Explorer.

Now some of you may not want another add-on to make this work. I hear ya! All you need to do is configure your browser to spoof the user agent for Twitter.com.

As far as I can tell, Chrome doesn’t have a permanent per-site user agent switch. The only method I know that does not involve the use of an extension is a temporary one, which uses the Developer Tools > Network Conditions > Set User Agent option. You’re better off using GoodTwitter instead. If you are using a User Agent Switcher extension which allows site-specific settings, you can copy the user agent string from the method below.

Check out extensions such as Chameleon for Firefox or User Agent Switcher for Chrome mentioned here.

This trick is exclusive for Firefox users.

Et voilà! The good old, usable interface is back. And we used the exact same trick that GoodTwitter uses.

Ghacks needs you. You can find out how to support us here (https://www.ghacks.net/support/) or support the site directly by becoming a Patreon (https://www.patreon.com/ghacks)). Thank you for being a Ghacks reader. The post Restores Twitter's old interface with GoodTwitter, an extension for Firefox and Chrome appeared first on gHacks Technology News.