There's certainly no shortage of messaging apps and services to choose from, but if privacy and security are your key concerns then the field is narrowed somewhat. Using email and SMS as means of communication is a pretty insecure option. Both are easily intercepted, and passing through middlemen means there is scope for invasions of privacy. In fact, outside of pretty specialist tools, there are three main players to consider: WhatsApp vs Telegram vs Signal.

Each has its strengths and weaknesses, its benefits and drawbacks, but they all have one this in common: encryption. This means that the messages you send are scrambled, so even if someone managed to intercept them, they will be unreadable.

For each of these three messaging tools we'll look at what they have to offer in different areas. We'll let you know what they do well, where they fall down, and point out anything else you might need to know – all while focusing on the issues of security and privacy. Let's dive in and take a look.

Being owned by Facebook would seems to be like a bad start for any app with a focus on security and privacy, and it's likely to be enough to put many people off using WhatsApp. You may have made a point of avoiding Facebook, and the company promises that any personal data collected through the messaging tool will not be shared with the social network. Whether you trust that promise is entirely up to you. You may simply be swung round to the idea of WhatsApp by the fact that so many of the people you know use it and you want an easy way to keep in touch with them.

However, it does offer end-to-end encryption – you just need to check that it is enabled both at your end and people you chat with – and it is based on the Signal Protocol (yes, the one used by Signal!). WhatsApp says that it does not store any messages on its servers after they have been delivered, but they be retained for up to 30 days until they are retrieved by the recipient.

One of WhatsApp's big advantages is that it is available for a range of platforms – Windows, macOS, iOS, Android, even Windows Phone. There's also a web-based version, but this needs to be used in conjunction with your phone; it just makes typing longer messages a little easier when you're at your computer. Linux users are not officially supported, but there are unofficial desktop clients available for various distros. As well as text-based messaging, voice and video calls are also an option, and you can sent photos and files to the people you are chatting with.

While most WhatsApp users are interested in personal communication with friends and family on a relatively small scale, there is scope for large group chats. In fact, up to 256 people can take part in a single chat, making it ideal for small to medium-sized businesses, particularly if security is a concern – as well as the fact that the app is free. Unlike Facebook, WhatsApp is free from ads… for now at least. It has been rumoured for some time that ads are on their way, and it has recently been confirmed that ads will indeed start to appear in WhatsApp statuses in 2020.

As with WhatsApp and Signal, Telegram is a cross-platform messaging tool. There are clients available for iOS, Android, Windows Phone, Windows, macOS and Linux (32- and 64-bit variants). The service uses the MTProto encryption protocol, but not everything is encrypted in the same way. The bulk of messages are stored in Telegram's cloud servers and are encrypted on the server. Only Secrets Chats – of which more in a moment – are securely encrypted on sender and recipients' devices to ensure complete privacy. If you are particularly concerned about privacy, it's worth noting that Telegram is not completely open source, and the service has access to the encryption keys you use.

An extra feature offered by Telegram is secret chats. These are – obviously – encrypted, but they have an extra security measure built in. Secret chats can only be read on the device from which the message was sent, and the device that received it. Even using the same accounts, it is not possible to read the messages on any other devices. Additional security features include notification if a screenshot is taken of a secret message you have sent, and a block on the forwarding of such messages. Secret chats can only take place between two people, not a group. You can also send self-destructing messages that automatically disappear after a predefined time.

When it comes to group messaging, Telegram supports groups of up to 200,000 – and it's hard to imagine a scenario in which this would not be enough. There is also the option of using 'channels' which can be either public or private. Public channels make it possible to send messages to very large numbers of people at once, and they can have an unlimited number of subscribers. Whether in a group chat, or a one-to-one, Telegram allows you to share files of up to 1.5GB in size, as well as the usual photo sharing option.

If you're keen on avoiding ads, Telegram could be a good choice. The service does not need to make money through advertising because as noted in a FAQ, "Pavel Durov, who shares our vision, supplied Telegram with a generous donation, so we have quite enough money for the time being". 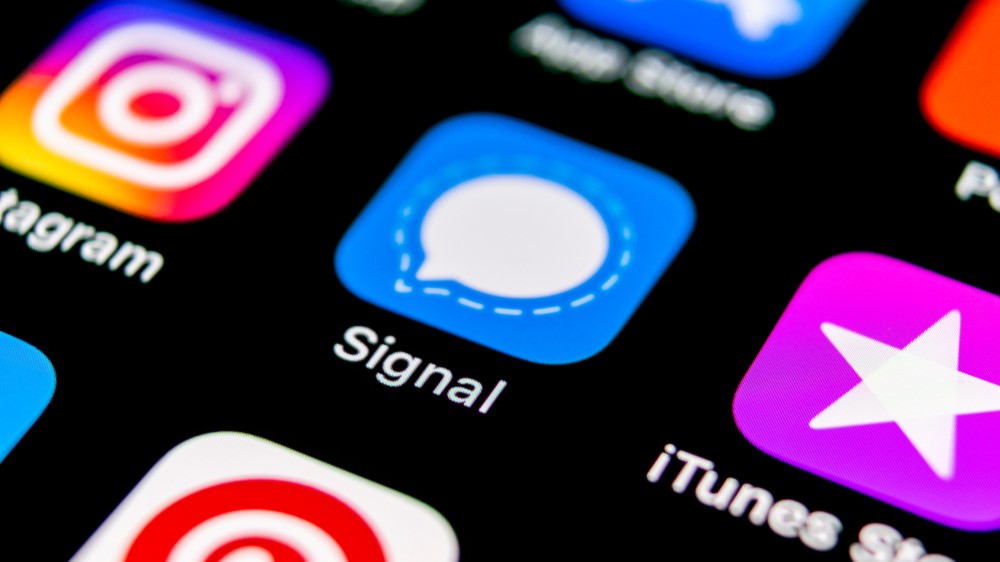 Made famous – or at least a little more famous – thanks to the fact that it was revealed to be Edward Snowden's favourite secure messaging tool, Signal is available for Windows, macOS, Linux (Debian-based distros), iOS and Android. The desktop version of Signal is not, strictly speaking, a standalone app, as in order to use it you first need to install and configure the mobile app. Once this has been done, the desktop app can be used without a phone being present.

Signal has links to WhatsApp as co-founder Brian Acton helped to form the Signal Foundation with the aim of promoting private messaging.

As you would expect, there is end-to-end encryption (using the Signal Protocol, no less!), and Signal assures users that no one other than the sender and the intended recipient is able to see messages. To further boost security, it is possible to choose how long messages and conversations are available for. In essence, you can create self-destructing messages that are rendered completely inaccessible – by anyone – after a period of your choosing. The encryption keys are stored on users' phones and computers, never on servers, and to avoid the potential risk (albeit a very small one) of spoofing, you'll be warned if the security key of anyone you are talking with changes.

Group chats can include up a virtually unlimited number of people – the actual upper limit has not been specified, but there is a warning that in particularly large group chats it can take longer for messages to be delivered. Signal can also be used as the default SMS app on Android – although text messages cannot be encrypted.

Being an open source project, Signal is not only free, but also open to great scrutiny so there virtually no chances of anything untoward creeping into the code. The non-profit organisation points out that "there are no ads, no affiliate marketers, no creepy tracking", and it's hard to ask for much more than that in terms of privacy.